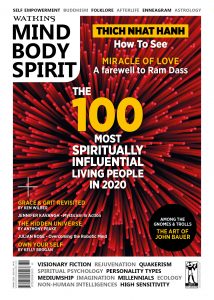 Watkins Mind Body Spirit, a renowned publication based in London, has released their 2020 list of the 100 Most Spiritually Influential Living People.

Zinovya Dushkova has been ranked as number 49. Thus, she has become the first woman from Russia and the former USSR countries to be included in the list and the only representative of this region in 2020.

Watkins Mind Body Spirit is published by Watkins Books — the oldest esoteric bookshop in the United Kingdom that was established in 1893.

John Watkins was a friend of H P. Blavatsky and was himself personally involved in seeing the first edition of The Secret Doctrine through his printing press. The idea of founding the bookshop is said to have occurred to Mr. Watkins in a conversation with Madame Blavatsky in which she lamented the fact that there was nowhere in London one could buy esoteric books.

In 2011, Watkins Mind Body Spirit started publishing the 100 list with the goal of celebrating the world’s living spiritual teachers.

1) The person has to be alive as of January 1st of the respective year
2) The person has to have made a unique and spiritual contribution on a global scale
3) The person is frequently googled, appears in Nielsen Data, has a Wikipedia page, and is actively talked about throughout the Internet.