The Ascending Goddess by Zinovia Dushkova has won the Silver Medal of the 2020 Nautilus Book Awards in the category “Religion & Spirituality of Eastern Thought.”

Established in the USA in 1998, the Nautilus Book Awards is considered a major book award and has been conferred to prominent authors including His Holiness the Dalai Lama, Desmund Tutu, Thich Nhat Hanh, Deepak Chopra, Eckhart Tolle, Rhonda Byrne, and Marianne Williamson.

Awards are given to print books of exceptional merit that make a literary and heartfelt contribution to spiritual growth, conscious living & green values, high-level wellness, responsible leadership and positive social change, as well as to the worlds of art, creativity and inspiration. 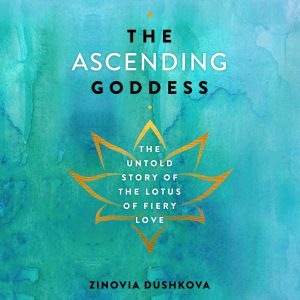 Our fourth book, The Ascending Goddess, has been released as an audiobook.

Visit the following websites to order your copy: 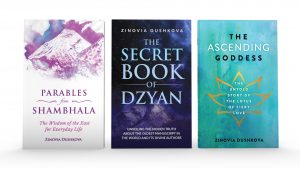 Parables from Shambhala, The Secret Book of Dzyan, and The Ascending Goddess are now available as hardcover editions.

Please visit the respective links to order your copy. 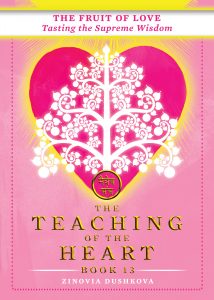 Four years after the publication of Book 1 of The Teaching of the Heart series, its final book, The Fruit of Love: Tasting the Supreme Wisdom, has now been released by Radiant Books.

In this book, the Lord of Love and Compassion will give you the final messages, expounding them in aphoristic form. As you reflect deeply on each saying, you will find new pages of revelation opening before the eye of your heart. And the application of this wisdom in your own life will enable you to successfully accomplish the ultimate mission that has been assigned by the Higher Powers to earthly humanity from the very beginning of the creation of our world. 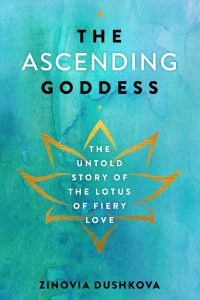 Unveiling our forgotten history, Zinovia Dushkova, Ph.D., continues to reveal sacred texts that have been immortalized in the secret depositories of Shambhala. This time her new work, published by Radiant Books, represents a synthesis from the pages of the Book of Dzyan and the Book of Fiery Destinies, which tell about the creation of our world by Woman — the Goddess Lakshmi, who is known in Gnostic Christianity as Sophia, the bride of Christ.

The Ascending Goddess: The Untold Story of the Lotus of Fiery Love will allow you a glimpse into those distant times when our planet was still in the process of creation. The Divine Man and Woman — Christ and Sophia, inseparably united in the Heavens — turned their gaze to the Earth with the aim of sowing the seed of Love there. So the Woman was the first to descend to the planet — not only to breathe life into it, but also to prepare the soil in human hearts for the Coming of her beloved Man.

Elucidating the path of Lakshmi on the Earth, The Ascending Goddess will help you understand in a new way the spiritual path which every woman is destined to traverse, along with the rest of our planet’s humanity. This book will fundamentally change your attitude towards so-called wrathful Deities and will also tell you about the structure of the Hierarchy of Light, revealing the secret purpose for the descent of the Supreme Gods from the Heavens and their lives among ordinary people — even today!

Radiant Books publishes Book 12 of The Teaching of the Heart series, inviting readers to unfold the petals of the Divine Flame within their hearts.

The Rainbow of Fire: Unfolding the Petals of the Divine Flame ends the trilogy within The Teaching of the Heart series that serves the purpose of the present Solar System through pouring forth the currents of Love-Wisdom.

Under the influence of Cosmic Fire and renewed rays of numerous stars, the seven centres of consciousness of the Earth, as well of all prepared people, are awakening to their new and transformed state, thereby composing glowing Rainbows of Fire on the Subtle Plane.

In Book 12, this long-awaited transfiguration of the world through the Flame of Love underlies the heartfelt conversation between the Lord of Love and Compassion and His Beloved. As before, the splendid interweaving of poetry and prose conceals profound mysteries, which are now revealed to all open hearts.